Fat in the Head

Fat in the Head is the culmination of over 15 years of experience with being fat and losing weight (with varying degrees of success). It's about putting psychological wellbeing before the idea that 'skinny is the only way to be', as much as about practical advice to taming your inner Cookie Monster. It's about learning to live with disappointment and responding with "I know, me too!" About getting inspired by failure rather than daunted by stories of success. It's for those who are genuinely fat-shaped as well as for those who are Fat in the Head only.
Bio & contact
Skip to content 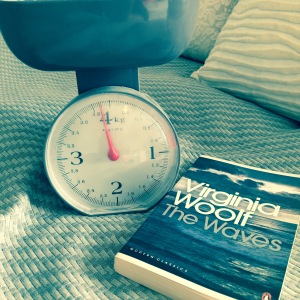 I am sad. Again. In bed with the covers pulled up to my chin, my eyes rest on the kitchen scales. It’s one of those classic ones, with a clock face. Only this one is better than a clock, because on this one time never passes. I can lie in bed all day and the big red pointer would still say it’s a few minutes before 4kgs.

There is construction work going on outside. A constant noise of random construction sounds, but nothing too intrusive. Inside (in my head inside) a million thoughts come and go in rapid succession.

I feel like one of the ships I saw from the airplane last week, flying back from Sardinia. While there, I had attempted to read a book on physics. Something about time passing faster high up on a mountain. The book was meant for laypeople, but I still didn’t quite get it. Until I looked down on those ships that didn’t move in a sea that didn’t move and I wondered if that was the point.

What I saw reminded me of the opening lines of Virginia Woolf’s The Waves:

“The sun had not yet risen. The sea was indistinguishable from the sky, except that the sea was slightly creased as if a cloth had wrinkles in it.”

(Incidentally, the whole opening scene of The Waves is one of the best pieces of prose I ever read)

The wrinkled cloth I was looking at had ships scattered around on it like abandoned toys. While on the plane the cabin crew was doing a hasty round of trash collection before landing, down there on the cloth nothing moved. The ships and the sea were on pause. Their stillness seemed like a performance. As if they would carry on as usual the second they were out of our sight. But then I wondered about the sailors. They wouldn’t be frozen in time would they? Wouldn’t their time be passing just like mine? Maybe I still didn’t get this physics thing after all.

Back here in bed, I step outside of myself for a moment and I see a sad woman underneath wrinkled sheets, lying perfectly still, staring at her kitchen scales. On pause. Except inside, inside the thoughts are coming and going and loud like sailors. Working round the clock. Darting from here to there. Never stopping. Never on pause.

Sometimes I wish I was a musician. A songwriter, more specifically. To feel something and then to put it in a song. To be rid of it and then to have it for always in a song. It seems so simple, if I could do it. I wonder if that is what poets are: songwriters without a talent for music. No offence. I’m not a songwriter and I’m not a poet. I don’t have the talent for music or the patience for poetry. I just have to feel and wait for it to pass. And then whatever thoughts I had will be gone forever.

I close my eyes for a moment and when I open them, it’s still a few minutes before 4kgs.

Sometimes I get sad for no apparent reason at all. Most people I talk to regularly know this about me. My moods and history with depression are not something I hide or feel ashamed of, though I wasn’t necessarily keen on blogging about it. However, I started Fat in the Head because I wanted to shed a light on the psychological issues associated with being fat, and depression (incidental or prolonged) is one of them. When I say ‘associated’ I mean really just that: I think being depressed is neither a cause nor a result of being fat, but for me the two are not entirely unrelated. For example when I was too depressed and mentally exhausted to get groceries and cook, and relied fully on take-out and junk food for an extended period of time. Or any time I saw my fat self in photos and felt even more worthless than I already did.
That said, it is of course possible to be depressed without being fat and to be fat without being depressed.
Anyway, today I wanted to give a screenshot of sorts of what it is like, for me, when I’m sad. (This was last August by the way. Today I am totally fine, sitting at my desk, staring at the same kitchen scales)